The earth was without form or void …… by Jade Li/Lisa 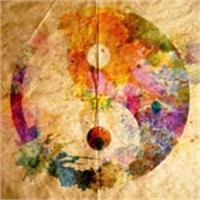 When I think of a colorless world, I think of The Bible verse from Genesis that says, “and the earth was without form, and void, and darkness was on the face of the deep.”

In most (all?) religions there is a creationist story. Once there was one, an indistinguishable void that became more. This’es and That’s turned into “ten thousand things” aka all-that-is. We all spring from this mysterious source, and we all return to it, in infinite recyclings. Now that all-that-is has become, there is no going back to the void.

I don’t see the void as nothing or sterile but more of a primordial soup of undifferentiated, unmanifested comsmoplasm.

What brings non-being into being? Nobody knows for sure, but it is why she is called the Mysterious Mother.

Let the prompt take you anywhere…