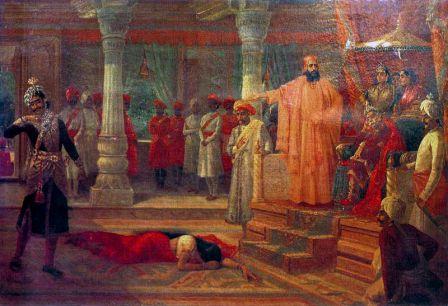 For those not familiar with the story

Draupadi was a princess married to five brothers (the personality of each symbolized a certain value), because their mother uttered the words “Share whatever you’ve got today.”

She was humiliated in court with a stripping attempt, and where her husbands did not come to her rescue. The incident led to the war of Mahabharata, where Lord Krishna played the role of a political and spiritual mentor to Arjuna, the most skilled warrior. There are several layers of politics, impact of past stories, shades of human behavior, deceit and strategy woven into the story.

Here is her reflection on what happened –


Truth, Valour, Strength
Loyalty and Obedience
were my fab Five mates.
till I met Sarcasm.

Enmity and Hatred
entered my castle
to humiliate and
create a chasm.

I owned five tools for Revenge.
But whom could I trust?
They had failed to resurrect
my honor from dust.

Politics stepped in
to design strategy
to enslave the fab Five
and write their elegy.

The New was mapped on the Old
none of the Five could wince.
The code is still worshipped
Nobody has looked back, ever since.