I did the Kickoff meeting for a Women Returners circle on Lean In (leanin.org), in the morning. We discuss that women on a break are being targeted by companies for getting experienced resources at low cost, and there are many platforms making money out of this huge market.

Ironically, the news items that kept raining in on me on various devices and platforms are as follows:

2. A 37 year old guy places a matrimonial ad for a non-smoker, non-feminist, good cook, never-married-before girl below 26 years of age. A girl chooses to pull his leg with a humorous reply, and is threatened with rape and murder for that – all on Twitter. 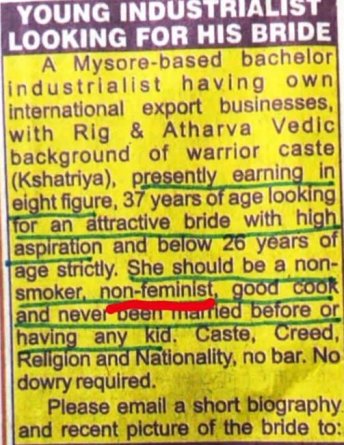 The obnoxious language of threats issued to the girl are beyond acceptable levels of decency, and cannot be reproduced here.

3. An actress and ex-Miss India is kicking off the #MeToo movement in India, by exposing industry veterans. She has been challenged for defamation in court. Other senior male actors are either silent, or cast aspersions on the character of the actress. A sting operation covers their chauvinist remarks on the subject (She must have beeon on her periods on that day).

4. A female film director mentions being a victim of domestic violence, and is accused of being a ‘known alcoholic’ herself.

How does it reduce the gravity of the crime, and couldn’t the two be related?

And many more similar cases are reported every day.

Is there hope for womankind?

God, keep my head above water
Don’t let me drown, it gets harder
I’ll meet you there at the altar
As I fall down to my knees

Credit: The verse is from the prompt – song by Avril – Head Above Water.

6 thoughts on “Page of a diary”